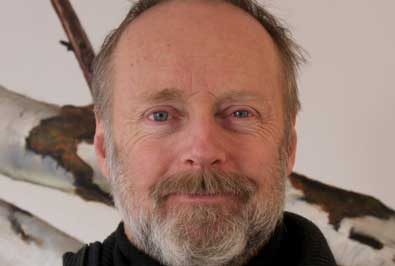 Born in Worchester, England, in 1960 / Lives and works in London, England

Born in Worchester, England, in 1960 / Lives and works in London, England

Julian Perry’s Benacre Birch series, together with Benacre Tree, depict silver birch trees painted on a stretch of Suffolk coastline. Each image captures silver birch trees at the moment they topple over the cliffs of Benacre, an area that suffers up to ten meters of erosion a year, the highest rate in the UK. The trees’ exposed roots convey the violence of erosion, while the clumps of land, still bearing the grasses that grow around the trunks, express the moment of the cliffs’ disintegration. Benacre Birch III and Benacre Tree even appear to hover above the places where they had stood only a moment before, their barren branches signifying loss. The paintings’ immense scale adds to the sense of turbulence; it seems as if the fragments of trees and land could fall onto the viewer gazing upward. Although drawn from present-day Suffolk, the wild plants surrounding Perry’s silver birch trees recall Albrecht Dürer’s 1503 watercolour, The Great Piece of Turf, especially the dandelions to the left of the trunks delineated in Benacre Birch I.